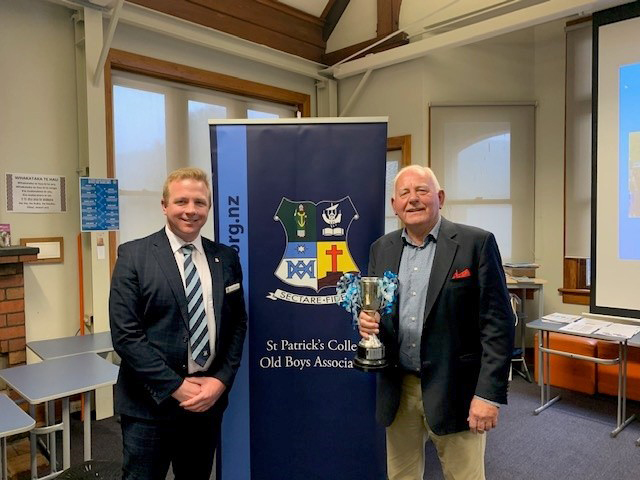 Today, everyone is aware of the Special Olympics. It was founded in 1968 by Eunice Kennedy Shiver (President John F Kennedy's sister) and has over 3.7 million athletes from over 170 countries in all region of the world. It provides the opportunity for children and adults with an intellectual disability to participate in a variety of olympic type sports and give them continuing opportunities to develop physical fitness, demonstrate courage while sharing the experience with their families and the community.

In New Zealand, how did the Special Olympics begin and who was the founder? That's where the Grant Quinn story begins!

Grant Quinn, who is an Old Boy of St Patrick's College, Silverstream, was the Captain of his local swim club back in the 1980's and was training Colin Bailey, a young man with Down Syndrome. By chance, an American Doctor & Rotary Scholar, Dotti Fitzgerald (a Mother of two twin boys with Down Syndrome) who was out in New Zealand researching intellectual disabilities, noticed Bailey, swimming at a Rotary sports day and asked if he was trainining for the Special Olympics. Fitzgerald was so impressed that she spoke to his parents and said she would try & get Bailey into the next international games. In preparation for his acceptance for the games, the Hutt Swim club prepared Colin Bailey by getting a squad together and began intensifying his training.

Fitzgerald then moved to Japan. Grant Quinn then saw nothing was happening so contacted the International Office of the Special Olympics to follow up and found nothing had been put in place. However, he received a reply that was encouraging. The International office advised ,they had been trying to set up an organisation in New Zealand but had been unsuccessful and, if he could get a team together, selected from a National event, the Special Olympics would offer him six airline tickets for four athletes and two official.

With an official invitation and travel secured, Grant first found three other athletes to join Colin Bailey and implemented a training programme. He then secured the help of the Hutt swim club, renowned swim coach, Tony Keenan and the Wellington Swimming Association. A media campaign was put together including Television One airing a programme on the Special Olympics and raising awareness. A total of twenty four thousand dollars was raised (a lot of money in the early 1980's) and in June 1983, the inaugural New Zealand Special Olympics Team, consisting of Colin Bailey, Peter Spijkerman, Brent Busy and Gordon Llewellyn touched down in Baton Rouge, Louisana, USA to complete at the Special Olympics World Summer games.

The 1983 Special Olympics inspired Grant, so on his return to New Zealand, he took two years leave from his job as an AMP Insurance Agent and concentrated on setting up a Special Olympics in New Zealand. He toured the country getting all the Mayors interested in The Special Olympics and called on the support of of sporting celebrities such as John Walker, Sir Edmund Hillary, Rod Dixon & Stu Wilson. By 1985 he had encouraged all the regions to participate in an inaugural Special Olympic games in Lower Hutt that year. Two International teams from Australia and New Caledonia also attended and made up the 672 athletes at the event.

Grant and his wife Wendy, have continued their involvement with Special Olympics NZ throughout the past 30 years. Grant acted as a Trustee of Special Olympics New Zealand in the early days and went on to become Games Director of the Asian Pacific New Zealand Summer games in Christchurch in 2005.

Through drive & perservance Grant & Wendy created a national sports training movement for people with intellectual disabilities. Unlike many volunteers who work with Special Olympics globally, Grant & Wendy do not have a family member with an intellectual disability. Their motivation was not driven by a personal need, rather their desire to create something of benefit for the community.

Special Olympics New Zealand owes its existence to Grant & Wendy Quinn. From a very small beginning, providing four athletes with the chance to complete internationally, they have created the leading National Sporting Organisation for people with intellectual disabilities and have transformed the lives of more than 6,500 athletes and their families throughout New Zealand.

This award recognises St Pats Old Boys who have promoted the betterment of the people of New Zealand and fostering the catholic way of life and carried the principles taught at St Patrick's college into the community. Grant's story is one of adhering strictly to those principles, especially:

Grant says that the four original athletes that attended the Special Olympics in Baton Rouge in 1983, their greatest achievement wasn't the medals they won but changing public perceptions about disabled people and helped win acceptance for those with intellectual disabilities. Grant is very proud of what he has achieved. He advised that" it wasn't that long ago that the intellectually disabled people were locked up in institutions and were not apart of the community. They were locked away in Templeton & Kimberley... I would like to think that the Special Olympics played a part in closing those places".

Grant has no doubt that the Special Olympics have changed our communities & believes the best example of a more tolerrant and accepting society was Auckland Special Olympian, Tim Fairhall, recently speaking in front of the Finance & Expenditure committee at Parliament, arguing that as a person with Down Syndrome, his life expendancy will be lower and may not live until he is 65 year old. He would like to lower the age of access for the funds in his Kiwisaver account. Another example of acceptance was when Angus Dempster, a Power lifter from Whangarei, became the first Special Olympian Internationally to win a gold medal in an open competition. These are just a few examples, indirectly, where people with intellectual disabilites have the confidence to express themselves and view their opinions to a more open and tolerant society, which may not have been possible without the special olympics.

Grant Quinn has also played a significant role in that change in public perception and acceptance of people with intellectual disabilities due to his role with the special olympics.