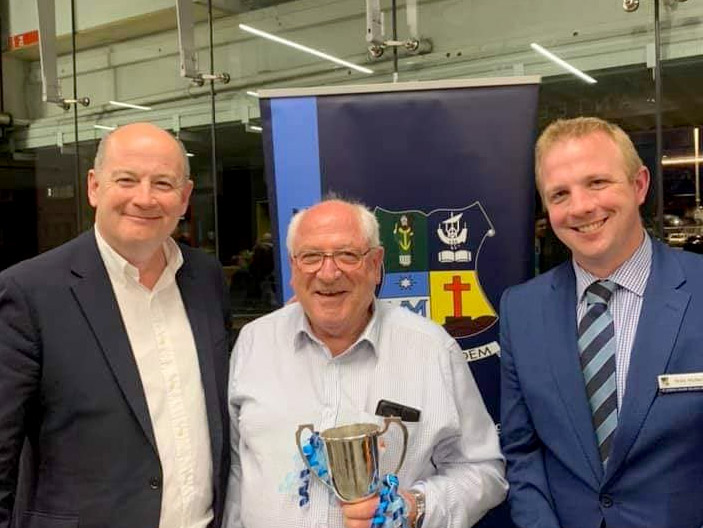 Every year the St Patrick's College Old Boys Association (SPCOBA) gathers annually to formally recognise and celebrate one of their many outstanding past students as a recipient of the Felix Kane Cup. St Patrick's Colleges of Wellington and Silverstream are founded on the values and leadership of the Society of Mary.

Felix Kane was a Silverstream Old Boy and was a long serving committee member of the association who was conscious of the college motto "Sectare Fidem" and being a strong Marist man. After his death, the executive decided to name the Old Boy of the Year Trophy in his honour.

This year's Felix Kane Cup Old Boy of the Year is an old boy of Town from 1958-1962. This year he celebrates 50 years as a Priest of the Society of Mary.

Our recipient was appointed to St Patrick's College Town staff from 1982 -1989. He was put in charge of the Transition from the Old Site to the New Kilbirnie site. This year Town celebrated 40 years since the move to the Kilbirnie site.

Our recipient was also appointed Rector and Superior at Chanel College Samoa. A College that Town has a good relationship with. From 1990-1997 he also spent time at Hato Paora College, another Marist Father's College.

He was the Provincial of the Society of Merit New Zealand during the challenging days as the Child Abuse issues in the SMNZ Colleges was coming to the Media.

He has since become a mentor and spiritual guide to many Priest and Religious leaders / members.

He epitomizes the Marist Charism - his gentle and humble approach has influenced many generations of men being educated in Marist Colleges.

His leadership guided the Society of Mary New Zealand through some of its most challenging time in this country.

He is man of prayer and a man of God who has inspired many Old Boys. He is a Marist living his good work Hidden and Unknown. Like our 2018 recipient, he is a humble, hardworking man whose actions speak louder than words.

So, it is my pleasure that this evening we recognise Fr Denis O'Hagan SM on being our 2019 Felix Kane Cup Old Boy of the Year.