Old Boy of the Year

The Felix Kane Cup, for 2012 has been awarded to STEVE HINDS, Old Boy of Town 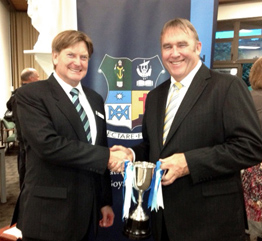 Steve Hinds, the 2012 recipient, attended St Pats in Town from 1969 until 1973. Steve was fit and rugby mad during his time at St Pat’s. After finishing college, he already had a few mates from the school First XV who had joined the Police force and they had loved it. Steve was attracted to a career in the Police by such obvious camaraderie. He was recruited and attended the Police College in Trentham in 1976. He joined Wing 66 in September and he graduated with 120 others in December that year. Thus commenced a stellar career. Steve had a good head for details and early on he found himself keen on detective work. In the late 70s there was a shortage of people wanting to join CIB, so, at the relatively tender age of 22, he was working on serious crimes in the region, including one of the country’s great unsolved murders – the bombing at Trades Hall in Wellington that killed caretaker Ernie Abbott.

Steve met his future wife, Helen, at Wellington Central; she was working in a non-constabulary role at the station and they married in 1979. Helen went on to have a successful career in human resources in the public service. The couple were together for 27 years until cancer claimed Helen in 2006. Steve always said that Helen was extremely supportive of him and it wasn’t always easy being the wife of a police officer.

He moved to Porirua CIB in 1979 and was seconded to the Wellington Crime Control Unit in 1981 as an acting sergeant to bolster the teams working around the Springbok Tour. He was on the ground in Molesworth St during the 1981 protests and saw that a significant section of society had been alienated against Police. Steve saw policing developed and saw that these events taught Police how to deal with violent street protests, the logistics involved and it probably led to better equipment being supplied to Police. Steve had a personal view on the Tour (he was anti the Tour) and his Catholic values played a significant role in forming his opinions. He did do his job – upholding the rule of law.

His career progressed – as did his rugby career - and he was appointed to the position of Sectional Sergeant at Porirua, then progressed to Detective Sergeant and then Detective Senior Sergeant at the Royal New Zealand Police College, involved in CIB training. It was at Porirua that his interest in the Police Association was fostered, eventually leading to his election as president in 1989, after a few years as a Kapiti Mana delegate.

He was the first commissioned officer to serve as President of the Police Association when promoted in 1995 and was granted life membership in 2010. Steve served as President for 6 years and enjoyed the experience of working for the Association, dealing with ministers of the Crown and the prime minister and being involved in change during such a turbulent time.

After 6 years with the Association, he took a couple of years leave without pay, during which time he did some consulting work and carried on with his sporting interests. He returned to Police in 1998 as an advisor on health and safety issues and was involved in the development of Staff Safety Tactical Training.

He then went on to work in a political environment where, as a Superintendent, he was able to put his skills honed in the Association to good use. In 2007, he was appointed a Visiting Fellow to the Australian Institute of Police Management, Sydney, training aspiring police leaders from Australasia.

His skills as a trainer were also in demand in the Solomon’s, Indonesia and at the FBI headquarters in Virginia. During 2009 Steve worked on professional standards and believes that modern policing, as well as being more accountable than it has ever been before, is also strong on integrity and ethics, thanks to the Code of Conduct.

At 56 years of age Steve retired from the Police and in his retirement stays fit, plays golf and maintains his links with rugby – as he is currently a Citing Commissioner on the IRB’s elite panel.

Footnote: The words Poacher and Gamekeeper had been mentioned by a few when research was carried out on Steve’s background.